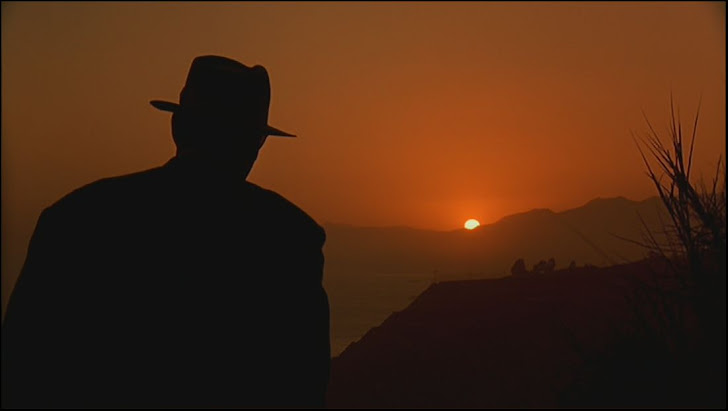 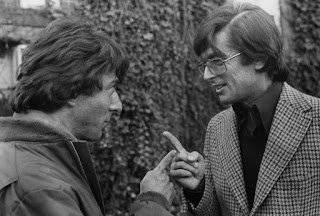 Evans first collaborated with Dustin Hoffman as the producer of Marathon Man (1976), with both of their stars truly on the rise. The film was a solid hit, with the dental torture scene quickly becoming solidly entrenched in pop culture ("Is it safe?"), but oddly enough, it was the gag reel, showcasing Hoffman's mercilessly weird send-up of Evans' various mannerisms and obsessions, which would become the more enduring piece of Hollywood folklore. Part of it was used over the credits of the film adaptation of Evans' autobiography The Kid Stays in the Picture, and included in its entirety as a DVD extra:

All just a bit of good fun, but it seems that the Kid wasn't too amused when he felt that Hoffman had taken this act too far in his role as the babbling, incoherent 'Mumbles' in Warren Beatty's 1990 film of Dick Tracy:

“He played Mumbles for scale just so he could do me and exaggerate it. Nice compliment, huh?” Evans said, his voice low and edgy. “I don’t mind if Warren Beatty plays me. But this midget? He makes his living off me.”
Los Angeles Times, Jan 4, 1998

At the time, Evans was grumbling about a parody that cut a bit closer to the bone in the 1997 political satire Wag the Dog, in which Dustin Hoffman plays a sleazy Hollywood producer employed by the US government to construct a fake war in the media against Albania, in order to divert attention away from allegations of sexual misconduct against the sitting US President.

With Robert De Niro playing the political 'fixer', David Mamet's spectacular scriptwriting, the guiding hand of Barry Levinson in the director's chair, and Mark Knopfler's slyly cornball soundtrack, Wag the Dog remains a slick parody that can sit proudly alongside the likes of Warren Beatty's Bulworth (1998) and Tim Robbins' Bob Roberts (1992) as one of the great political satires of the 1990s.
What truly stands out in Wag the Dog, however, is Hoffman's performance as producer Stanley Motts. Absolutely no one in the business was under any illusion whatsoever about who was the real-life inspiration for the character.

A high school dropout knows what an actor, a writer, or a director is, yet a Rhodes scholar has no idea what a producer is.
Robert Evans, The Kid Stays In The Picture

Hoffman did make a point of denying having done the screamingly obvious - “I was not playing Bob Evans, I was playing my father" - but one really has to assume that he did so with his tongue planted firmly in his cheek.

Several years later, with the 2002 cinematic adaptation of The Kid Stays in the Picture having become a massive hit, then the production of Kid Notorious, an animated TV show based around the ludicrous exploits of Robert Evans juggling duties as a film producer with those of a secret agent and playboy, it looked as if Bob Evans had finally come back in from the cold. He'd become something of a cult figure, a pop-culture icon.

To Evans himself, though, that wasn't enough. The infamy surrounding the 1980 cocaine bust and then his alleged involvement in the "Cotton Club Murder" continued to haunt him. A tell-all confessional autobiography, his reinstatement at Paramount, an award-winning documentary and a cartoon simply couldn't erase over a decade of shame from his mind.

Then, the unthinkable happened.

Twenty-some years after producer Howard Koch had walked into my office, dejected at having to break the news that my infamy was preventing me from receiving the Thalberg Award, a moment of déjà vu: His son Hawk, president of the Producers Guild, burst into the very same office—but this time the message was different.
“Bob, I’ve got news. The Producers Guild voted unanimously last night to give you the David O. Selznick Award.”
Again, I was stunned. For more than twenty years I had given this up as a fantasy. I had resigned myself to the fact that infamy does not open doors to prestige. Apparently, I was wrong.
For the second time in my life, I was speechless.
“We’re going to have Dustin Hoffman present you the award. He can’t wait.”
I hadn’t spoken to Dustin in years. I was glad I was sitting down; I don’t think my legs could have held me up at that point.
Could this be possible? Too much had happened for me to take this on faith. I started to count down the days till the ceremony.
On the day of the award, I was in knots. What would Hoffman say? How would I be received? I sat in the audience as impassively as I could, terrified that somehow this too would be taken away from me. As Dustin went up to the podium I realized that I was holding my breath.
Hawk Koch had told me that Dustin wasn’t making a prepared speech, just presenting the award. I was expecting him simply to announce my name, call me to the stage, and that would be that. After years we’d spent at arm’s length from each other, it would have been more than enough to reconcile us—and more than enough to make me feel that everything I’d been through had been more than worth it.
What happened next was so astonishing that I don’t dare paraphrase it.

A shock. The entire audience—close to one thousand of my peers—stood up and applauded. I began to tremble. This standing ovation? For Kid Notorious? I didn’t think I’d make it to the stage. Arms embraced me. Kisses, too.
It seemed to take forever to make my way to the stage. I had to stop several times, to consciously stop the tears.
Dustin walked toward me. We embraced. To me, it was the most emotional embrace of my entire career. The picture of that magic moment will remain with me forever.
Dustin moved to the side, looking directly at me, listening intently. The crowd was applauding and still standing. It felt like hours, but it was only minutes before everyone sat and the ballroom was silent.
“It’s a very tough act to follow Dustin Hoffman,” I finally said. “True, isn’t it, Dustin?
“You know, looking at the people here tonight, there are so many who deserve this award more than myself. But truth’s truth. I stand alone in the history of Hollywood as the only man who started his career as head of a studio and ended it as an animated cartoon.” (Laughter, applause.)
“Many’ve said that David O. Selznick died broke. He didn’t die broke. Maybe in dollars, but he was the richest man in this whole industry. What greater wealth is there than to be remembered through all eternity? Do me a favor, David. If I ever see you, accept me for what I am, I ain’t a bad guy.
“There was only one David O. Selznick. How proud I am to get this award.
“Thank you. Thank you very much.”
And I walked off the stage.
- Robert Evans, The Fat Lady Sang 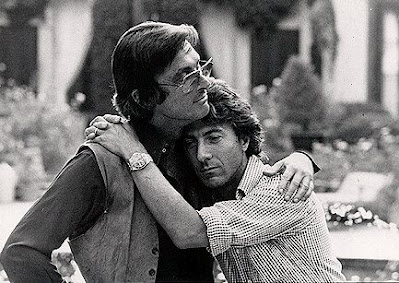